When It Comes to Emergency Mustering, Keep It Simple 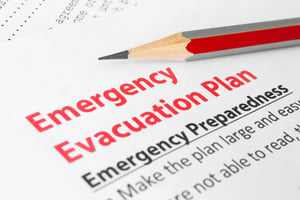 Emergencies can’t be predicted, they can only be planned for. But if your plan is so complicated that it’s distracting during evacuations, you might as well have no plan at all. The best plans are both thorough in the range of events they cover and clear to follow.

Let’s look at why developing an emergency evacuation plan is critical for a business’s staff and financial safety, as well as what makes an emergency plan viable.

The Risks Are Real

A few years ago the US Department of Transportation funded a new round of research into the human and financial costs of emergency events, including natural disasters and infrastructure failures. One research team found that during 2015—the last year studied—more than 22,000 people died worldwide during 376 different emergency evacuations, with a large percentage of those deaths resulted from inadequate civil and corporate emergency preparedness.

There are also the considerable financial impacts of emergencies to consider. The Multi-Hazard Mitigation Council, a US-based public/private partnership, analyzed emergency planning and disaster recovery efforts in the US between 1993 and 2003 and found that every dollar invested in emergency planning during that period mitigated $4 in future damages from disasters and other emergencies.

Complexity is often the biggest weakness in emergency plans and technologies. Robert Lewin, an emergency management director in southern California took ownership of one such failure in 2017 after the wrong civilian population was told to evacuate during a wildfire. “It was our fault on that,” he said. “It’s a complicated [alert] system. One of the boxes was inappropriately clicked, despite our training and having our very best person sitting right next to me performing it. [The system] needs some refinements.”

The answer then is to keep emergency solutions simple. At a bare minimum an evacuation program should include:

Simple doesn’t mean simplistic though. The outcomes of your planning process—your emergency plan itself and the technologies you will use—need to be as simple as possible. Its development should be rigorous.

Fit Your Plan to Your People, Not Your Org Chart

One mistake we’ve seen over and over is businesses trying to account for staff by department during emergency mustering. But evacuations don’t happen according to org charts. Most workforces don’t spend 100% of their time in the same locations assigned to the same departments. 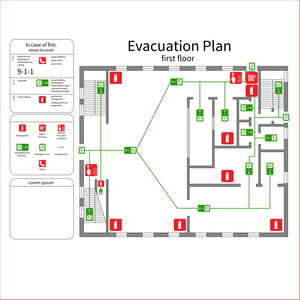 A more workable plan is to divide your facility into zones. Then assign emergency roles to the personnel who are primarily stationed there. Assign zone leaders to maintain lists of all employees in their zone and to perform headcounts at muster points during emergencies.

Assign searcher roles to confirm evacuations in your facility. Make sure to assign mixed gender search teams so restrooms can be appropriately searched.

Performing these tasks accurately and efficiently can often be challenging. Especially in open facilities with a mix of visitors and contractors. It may make sense to use an electronic tool that automatically logs personnel safe as they approach muster points.

Then Fit Your Plan to Your Facility

Another error we’ve seen businesses make is to only identify evacuation routes on paper. You never want to find out during an emergency that your plan doesn’t account for a real world complication. Have your assigned zone leaders and searchers actually walk their proposed routes through your facility looking for hazards and potential issues. 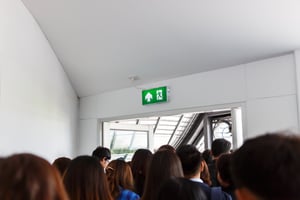 Ensure your signage and training directs personnel through the most efficient evacuation route to their assigned muster point. It’s human nature to exit a facility the same way you came in. Emergency training and planning needs to overcome that impulse.

Muster points should ideally be 100 meters from your facility to protect personnel from fire, debris, and explosions. Also to create a perimeter for first responders to work within. This distance can sometimes put muster points beyond the range of electrical and network infrastructure, so if your business is considering an electronic mustering system, make sure that it can function wirelessly or with solar-powered receiver stations.

Make Sure Your Plan Transitions to Response

Evacuating personnel and securing critical assets are your first priorities in an emergency. But an emergency plan doesn’t end with ticking personnel off at a muster point, it needs to include procedures for coordinating with first responders.

As one fire chief recently put it, the most important information they need when arriving on scene is “up to date floor plans. Remember, first responders are entering an unfamiliar building, one that may be filled with smoke or debris. Providing a facility map is a valuable tool.” So make sure to include paper or electronic maps in the kits provided to mustering leaders.

Once your plan is in place, one final thing matters: training. Practice your evacuation plan regularly. It needs to become second-nature to your employees.

Real Time Networks security experts are also happy to answer any emergency mustering questions you might have.

Shannon Arnold is the VP of Marketing and Strategic Partnerships at Real Time Networks.

How To: Build a Business Case for Physical Security Solutions

How To: Calculate & Analyze ROI on Asset Management Systems

Get your free copy